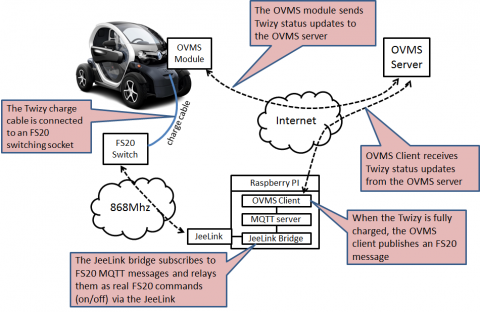 A post on the twizyowners forum about timed charging the Twizy triggered Pieter to document his recent progress in Twizy and home automation hacking. In his post, he explains how he connected his Twizy to his home automation system, and controlled charging of the Twizy.

In a classic case of 'scratching his own itch', he was annoyed that the ventilator kept on running for hours and hours after the Twizy charging was completed. He wanted to disconnect the plug from the socket when charging was finished to avoid unneeded energy consumption. The most simple and robust method for achieving this would be to walk to the garage and unplug the Twizy. But, he decided to do it automagically via home automation.